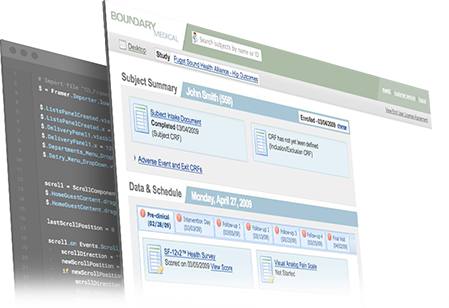 Quality improves during the same time

Before BoundaryMedical introduced its Outcome Enterprise™ (OE) product to healthcare providers those who were trying to measure patient outcomes were mostly piecing information together in Microsoft’s Excel or SQL programs. Their efforts were:

Then-Vice President of Product Development Jay Syverson, explained that while large  medical device and pharmaceutical companies were able to hire professionals to develop registries and studies, many providers and clinics had neither the time nor the resources to gather data – let alone code and analyze it so they could track and measure outcomes.

“The fact is, electronic medical records were still new,” he said. “Data was handled inconsistently and various inputs were housed separately. Few organizations were thinking about how to track data in order to measure outcomes. Those that were struggled with doing so in an effective and efficient manner.”

So when BoundaryMedical developed OE to organize outcome information into a solution to support studies and registries, making the data extractable for various kinds of analysis and reports, providers were eager to hop on board. Clinics also used the data collected to benchmark performance and identify predictive outcome trends based on diagnosis and treatment.

As subscribers grew, it became difficult for BoundaryMedical to stay on top of enhancements and new releases.  The start-up was releasing new versions about twice a year, with fewer enhancements than initially planned. Plus Boundary Medical was having a hard time scaling up to meet the increasing demand for OE.  The initial software had been developed using Groovy & Grails, for which there was a limited supply of knowledgeable developers. Syverson knew he had to find a supplier who would not be slowed down learning the technology while scaling up production.

“Not a lot of folks – even those who purport to be software developers – really understand how to manage all the moving parts when you are developing a product using a new or uncommon technology. Things have to be done in tandem, so you can put the pieces together as they are finished,” said Syverson.

Having been introduced to Coherent Solutions while with another software company, Syverson decided to extend his team to include an offshore unit in Coherent’s Minsk development center. While Coherent had a few developers who knew Groovy & Grails, they immediately began training several others to build up the practice. Soon the Coherent team included nine people: a business analyst, two QA professionals, five developers, and an onshore delivery manager.

“In 90 days Coherent helped us go from a new release every six months, to a release every three months,” said Syverson. “The Coherent delivery manager basically melded into our team here in Minneapolis. He understood our company and our culture, and communicated effectively with our team in Minsk.”

Moving all development to Coherent Solutions reduced costs by 70%

Syverson also found that the time difference between the Coherent team in Minsk and the onshore team in Minneapolis actually served to extend the workday. The Minsk team would be halfway through their workday when the Minneapolis team arrived at work. During the shared time the two teams could Skype and email – asking and answering questions. Then, when the Minsk team left for the day, the Minneapolis team continued working and sending information that the Minsk team could address the next morning – before the two teams would talk again.

Eventually, Syverson moved all software development to Minsk, lowering overall development costs by an impressive 70%. Among the efficiencies he found at Coherent was an Agile approach that dramatically reduced test cycles. Coherent also implemented an automated testing program that reduced QA spend as well as delivery time.

Syverson left BoundaryMedical during an ownership transition but he leverages the model developed as a best practice use case. “The partnership we developed between BoundaryMedical and Coherent was so seamless and productive, it stands out as one of the best examples I’ve seen for leveraging each other’s strengths to focus on a common objective.”