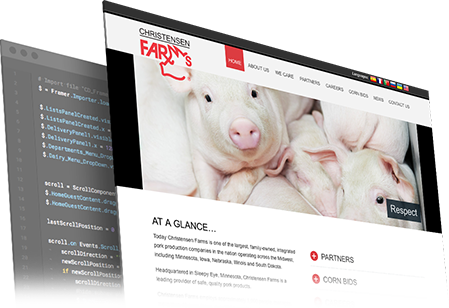 Pigs are, well, pigs when it comes to their appetites.

No company knows this better than Christensen Farms, the United States third-largest pork producer. Based in the small Minnesota town of Sleepy Eye, Christensen buys over 35 million tons of corn annually to raise some three million hogs.

Time for a fresh approach

The corn is procured and processed at feed mills in four Midwestern states. Until recently, each mill managed its own corn contracts and procurement processes separately with different and sometimes unreliable Access-based systems, making centralized reporting a labor-intensive and error-prone process. And when corn prices began a roller coaster ride—gyrating from $1.5 to over $8 a bushel—it became a serious issue.

When the company decided to open a new mill, it knew it needed a fresh approach for managing corn contracts: one standardized procurement application for all mills, and a centralized and automated mechanism for collecting and reporting data. However, Amy Junge, the company’s IT manager, knew this challenge would greatly outstrip the bandwidth of the two developers on her eight-person IT staff.

She found the answer 200 miles away with Coherent Solutions, a technology solutions and outsourcing company with offices and highly experienced teams in both the U.S. and Eastern Europe. The company’s high-touch relationship approach includes consultants with business analysis, solution architecture, and project management consultants linked closely to high-quality offshore development resources, with minimal communication problems or instability associated with other offshore development firms.

Given Junge’s past experiences, that’s exactly what she needed. “I’ve worked with offshore companies before,” Junge says, “but most of them focus mainly on software development. “

"We needed a partner to develop a solution. This required a much broader range of resources than typical offshore developers, and the ability to get a major project done in an aggressive time frame. That’s why we went to Coherent.”

During the first few months of the project, a Coherent business analyst visited Christensen’s office to gather business requirements from a cross-functional team of users, from the Director of Finance down to the mill operators. Development work later began in Coherent’s Minsk development center with a team of five developers and testers.

Even though Minsk was halfway around the world, time zone and communication problems were few. “We had regular meetings with the entire team,” Junge notes. “The knowledge and skills of the Coherent team are just wonderful. They know the technology inside and out, and we were easily able to work with the Minsk team members one-on-one to resolve issues.”

The partnership with Coherent worked so well, Junge says, that two different versions of the application were developed and rolled out. “From a manager’s perspective, I can’t tell you how great it was to have a group of such capable and tightly-knit resources always available to focus on one thing and not be continuously pulled away by daily needs,” Junge says. “It really made a difference.”

Coherent’s new application uses the Microsoft .NET Framework, Microsoft SQL Server, and front-end powered by the Infragistics suite of GUI components. The application completely re-architects the old procurement and ticket management system, automates data flow between the mills and Sleepy Eye, and makes data available instantly for reporting. Manual data entry time has been slashed by 75%, and the quality of data has greatly improved. Most important, the company now has a centralized and scalable database and reporting system that can handle virtually any amount of data and be applied to new mill locations in the future.

This project led to an ongoing relationship between Coherent and Christensen Farms. Coherent’s latest effort is creating a centralized management and reporting system that farm managers can use to monitor the lifecycles of those three million hungry pigs. It’s another pivotal application for Christensen, but Junge has no doubts Coherent is up to the challenge. “The longer we work with Coherent,” she says, “the more confident we become as a team working together towards one goal.”