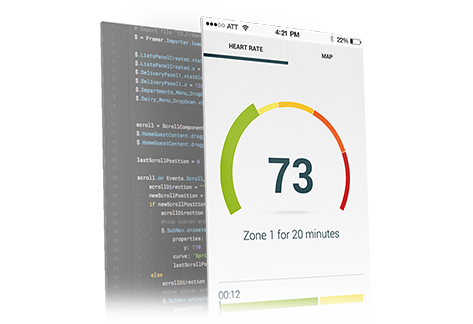 Life Time Fitness Founder and CEO Bahram Akradi conceived the idea for his company’s first mobile application while teaching a cycling class. This is one way Akradi stays close to the “healthy way of life” company he created from the ground up in 1992. Since that time, Life Time has grown into a public company with (as of January, 2015) 113 fitness centers in 24 states and Canada, as well as a wide array of health and wellness related services, products, and events.

“I was in the class,” explained Eric LeVin, Senior Director of Technology at Life Time. “Bahram had been using our LT Connect in-club app that uses ANT+ to connect to members’ heart rate belts. It provides the instructor with feedback on where members are in relation to their target zones. He wanted our members to have this same capability wherever they go, whenever they want.

That was in February, 2014. By March, The Life Time team had developed the requirements for the app and circulated an RFP to find a mobile app developer. It was awarded to Coherent Solutions on the basis of an exceptional proposal that, “. . . went above and beyond,” according to Life Time Vendor Contract Manager Sandy Garzon who has seen plenty of proposals in her ten+ years with Life Time.

“Coherent always goes above and beyond,” she noted. “And not just in their proposals. We can count on them to pull out all the stops for us throughout a project.”

Akradi’s vision for the app was to carry Life Time’s holistic, healthy brand into the mobile sphere the way Life Time has carried its high-end member experience beyond the walls of its fitness centers into its nutrition products, website, magazine, events and more. At its most basic, LT Connect mobile includes a library of workout regimens from cycling to running that members can follow. Taking it up a notch, members using a heart rate belt can sync with the app to get feedback on their workouts, getting voice reminders to push harder or back off, depending on their intensity. They can also map out routes, including information on suggested elevations, pace per mile and more. Going another step further, Life Time’s 2600 coaches can upload and push individualized training programs to their clients, incorporating targets for maximizing their training goals through metabolic and heart rate training.

“This is not just a simple app with downloadable workouts,” noted LeVin. “It has a lot of moving parts and is very configurable so members can use it to set, measure and reach their personal fitness goals. Honestly, I was amazed at how well Coherent pulled this off in such a short period of time.”

That period was just three months after kick-off. Akradi wanted the app to be available in the summer when many members start exercising regularly outside. The first release came out by the end of June, 2014. Nearly 6,400 people had downloaded it by the end of July, and more than 28,000 had gotten Life Time Connect Mobile by the end of 2014. Downloads remain strong – nearly 9,000 more downloaded it in the first two months of 2015.

Given the tight time constraints, LeVin was also impressed with the quality of LT Connect mobile. “This was one of the strongest externally developed apps we’ve ever done,” he said. Coherent’s “above and beyond” work on LT Connect mobile earned the company status as Life Time’s strategic mobile development partner.

Flexibility and local oversight lead the way to success

Coherent’s flexible development process helped to speed the project along, according to LeVin. Using an Agile methodology, the Life Time team in Chanhassen, Minnesota, had daily dialogues with the Coherent team eight hours ahead in Minsk, Belarus. Issues were addressed quickly and new iterations released constantly. Two quality assurance professionals worked closely with the development team to keep up with testing. Life Time protocol requires using Xamarin to develop Android and iOS versions in parallel, which was no problem for the Coherent team. Using the .NET framework and MVVM to separate business logic from the user interface, Coherent was able to build an application that maintained stability as it evolved.

A lot of credit went to Coherent’s onshore delivery manager too, who bridged the geographical gap adroitly. Coherent places a great deal of responsibility on this role as clients depend upon an accessible, onshore partner who can attend input sessions and address their concerns immediately.

After the successful debut of LT Connect mobile, Coherent has moved on to develop Group Fitness and Yoga mobile apps for Life Time. These apps make class schedules accessible to members wherever and whenever they need. But as always, Akradi’s vision is bigger than that. He wants to bring Life Time’s lifestyle brand to mobile devices, incorporating news and information on events, nutrition counseling, spa services and more. Coherent Solutions, which emphasizes fitness and health within its own culture, is happy to be running in tandem with this notable fitness leader.

CHECK OUT THE APPS WE’VE BUILT FOR LIFE TIME FITNESS