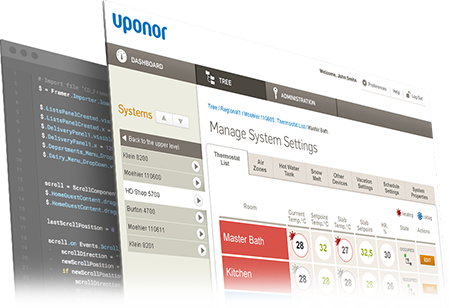 Uponor may not be a household name in North America, but the billion dollar Finnish manufacturer of under floor heating systems is growing steadily here. Upscale homeowners in cold places like Finland or Minnesota, where Uponor’s North American division is located, appreciate the comfortable radiant heat their systems provide. As a high-end building supplier, it’s natural that Uponor would also offer the latest web-based controls for their home heating systems. They were working on this technology when Coherent Solutions first met with Uponor’s IT group in Minnesota.

Uponor’s Climate Control Network (CCN) was conceived as a way for homeowners to adjust their homes’ temperature remotely. An owner could go on the web and turn the temperature up or down before coming home from work, for instance. Or a cabin’s system could be managed from home.

“We had built a proof-of-concept to test this product with our customers,” explained Chris Moore, VP of Information Technology for Uponor/North America. “We wanted to see how well it would be received.”

In fact, the CCN had immediate success and Moore’s group was soon working on a burning platform that could only handle a few hundred customer controls due to a dependency on inflexible third party technology. They needed a more robust, scalable system and they had two imperatives:

Moore spoke with several suppliers that had overseas operations, but was most impressed with Coherent’s practical, phased approach and Eastern European operation.

“We spoke with some Indian suppliers that offered attractive pricing, but Coherent came to us with a very efficient plan,” Moore said. “This was a complex application, and they understood it. Plus I was impressed with their people.” 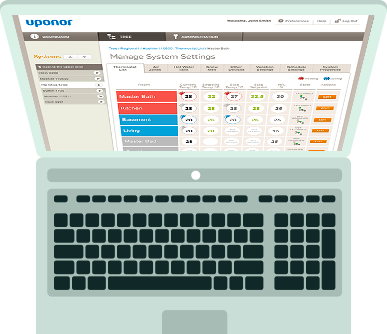 Coherent’s plan broke the project down into two main phases. The first phase consisted of Coherent working to elicit requirements from Uponor’s cross-functional IT/product development team, define a solution architecture, and create a development plan for the project. The team was able to finish this work in just five weeks and recommended building a system that featured ASP.NET MVC, Microsoft AppFabric Distributed Caching, and SQL Server 2008.

The speed and quality of Coherent’s initial work convinced Moore and his team to proceed to the second phase of the project with Coherent which consisted of doing the full development and testing of the system. He had been impressed with the team: “They were completely committed to meeting our needs but weren’t afraid to push back either – and that was okay. We went outside for this project because we needed their expertise, and we expected them to tell us the best way to do things.”

With just a little over seven months to complete the project, Coherent Solutions adopted an iterative approach to development, with frequent releases of new functionality and tight collaboration between the companies’ teams.

Moore visited Coherent’s development center in Minsk early in the development phase of the project and later a couple of Uponor product engineers also visited Minsk. “It was great to get that face-to-face time,” Moore said. “You get a sense of the people and the personalities involved. But communication between us wasn’t a problem. It was like these guys worked 24 hours a day. No matter when you sent an email, you’d get a reply almost immediately!”

Coherent successfully finished the project on time and under budget. Uponor’s new CCN system has capacity for up to 10,000 homes, and can be scaled up when the company markets the product in Europe and Asia. Moore noticed that the continuity of the Coherent team helped to smooth things out. “One of the great things about working with Coherent was there was no turnover in the team,” he said. “The same people who started on this project were there till the end. You don’t always get that with an offshore provider. Turnover is a big issue.”

At this point, Coherent Solutions is providing support services for the new CCN system and Coherent will remain involved as Uponor develops enhancements for the product, such as iPhone or other mobile applications.

“We envision a cabin owner being able to turn up the heat in his cabin from his mobile phone, as he is driving there,” said Moore. “The network could also be used for other household controls like lights and security. There are plenty of possibilities.”